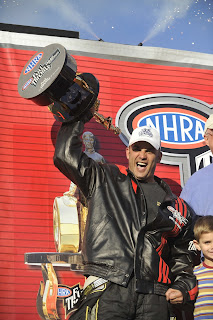 With the year coming to an end, and the best of the year lists making their way around, here is my list of the top races I saw in 2009. I covered several disciplines of racing, from late model stock cars at Toyota Speedway at Irwindale to off-road trucks in Lake Elsinore to Indy cars at Long Beach to NASCAR Sprint Cup Series cars at Fontana, it’s been a busy year for me.

5. The NASCAR Toyota All-Star Showdown at Toyota Speedway at Irwindale: Matt Kobyluck won the race, even though he was the second car to cross the finish line. Joey Logano and Peyton Sellers, the leaders in the race, crashed on the final turn of the final lap of the race. Logano actually finished ahead of Kobyluck, but Sellers and Logano were penalized for rough driving. Logano, obviously, went from Irwindale to winning rookie of the year honors in the NACSAR Sprint Cup Series.
“It was an unfortunate ending, but this is the All-Star Showdown,” said Kobyluck, who became the first two-time winner of the Camping World Series portion of the Showdown. “Everyone’s just going for it. Minor error there, or maybe it wasn’t an error, who knows? I’m only in control of my car. It looked like Joey overdrove the corner, couldn’t keep the car down, but he was going for the win. Peyton was going for the win. In a deal like this when there’s no points on the line, it’s all a truck, money, and bragging rights, the outcome’s always crazy.”

4. The February NASCAR Sprint Cup Series race at Auto Club Speedway in Fontana: Matt Kenseth won the race and it looked like he was on his way to a great season. Little did anyone know that it would be his last win of the season. Kenseth won the season-opening Daytona 500 and the race at Fontana. He was looking to become the first driver since Jeff Gordon in 1997 to win the first three races of the year. As it turns out, Kenseth didn’t finish well enough in the rest of the Cup races to qualify for the Chase. In fact, Roush Fenway Racing only won one other race all season. Even though the race at Fontana wasn’t the most exciting, it was significant because it was the pinnacle of Kenseth and Roush Fenway Racing’s season.

3. The Grand Prix of Long Beach: Dario Franchitti won the race, a testimony that his place in auto racing is in Indy cars, not NASCAR. (Danica Patrick, are you reading this?) Franchitti won on the birthday of his wife, actress Ashley Judd, and spent a considerable amount of time dedicating the win to his wife. The race was an otherwise uneventful one, except that it saw the return of Helio Castroneves. The “Dancing With the Stars” champion and three-time Indy 500 winner was facing tax evasion charges in Florida, but was acquitted on the weekend of the race. He flew from Florida to Long Beach and made it in time for the race. Roger Penske had three cars in the race, and had to make a tough decision about keeping three cars. Castroneves finished seventh in his first race back. Will Power, the Penske driver who was most likely to be pushed out by the return of Castroneves, won the pole and finished second. Tensions were definitely high in Long Beach that weekend.

Photo: Tony Schumacher won the NHRA top fuel championship at Auto Club Raceway in Pomona in November. It was my vote for the top race of 2009. (NHRA)
Posted by Tim Haddock, author-editor-storyteller at 11:00 AM